Hudson Bay is a vibrant and friendly community of 1500 people located in east-central Saskatchewan. Nestled in the Red Deer Valley, between the Porcupine and Pasquia Hills, Hudson Bay always attracts people looking to explore untouched nature.

Hudson Bay has a diverse economy based on forestry, agriculture, manufacturing, processing and eco-tourism. Forestry has continued to be the major source of employment and economic generator over the years, and our community has shown itself to be capable of supporting existing world class industries in the production of plywood and oriented strand board. In 1979 Hudson Bay earned the title of Forestry Capital of Canada. In addition, with the abundance of wildlife in the area, it has also become known as the Moose Capital of the World. The vast tracks of untouched wilderness enable visitors to enjoy year round recreational pursuits. The nutrient rich soils which surround Hudson Bay have enabled farmers to produce a wide range of crops on over 175,000 cultivated acres.

Hudson Bay is accessible by rail, bus, road and air. The town is located at the junction of Highways #3 (east and west) and #9 (north and south). The Canadian National Railway has three lines including the Bay Route to the Port of Churchill. Hudson Bay Transport and other private trucking companies provide truck service.

Hudson Bay is located along the Northen Woods & Water highway which is a 2,500km scenic route from Winnipeg Manitoba to Dawson Creek BC. Enjoy the lakelands of Manitoba to the parklands of northern Saskatchewan, Alberta and north east BC. For more information about “Western Canada’s Holiday Highway” please click here to visit the website.

The Saskota Flyway (Highway 9) is known as the International Road to Adventure, because it takes you from Hudson Bay, Saskatchewan, all the way south to Bismarck, North Dakota and beyond, along the way passing through northern forest, prairie parkland, vast stretches of wheat-production, not to mention parks and coal mining country.

Hudson Bay has a long standing history involving the railway. With tracks in all four directions, Hudson Bay still has regular train service. Via Rail offers departures from Hudson Bay to the Port of Churchill every Sunday and Tuesday, with return passenger trains coming through each Thursday and Saturday. As a result of this tourism attraction the Town of Hudson Bay has built a shelter for train passengers waiting to go on their adventure. The shelter is located at the West end of Railway Ave.
For more information on travel phone VIA Rail: 1-888-842-7245
Web site: www.viarail.ca or www.trainpackages.ca 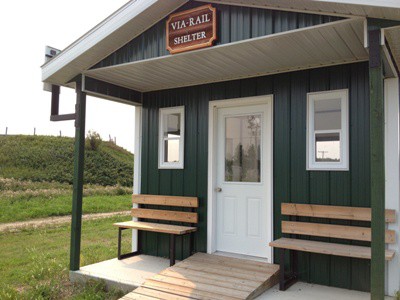 Hudson Bay’s Airport is unusual for a town of Hudson Bay’s size and having it available makes industrial expansion locally all that much more attractive.

The airport provides excellent service for charter and local aircraft and serves a water bomber base for forest protection. The airport, with a 5,000 foot runway and a 2,000 foot cross wind runway is able to accommodate almost any size of aircraft. A beacon and lights allow night landing.

Distances from Hudson Bay to:

Hudson Bay’s Airport is unusual for a town of Hudson Bay’s size and having it available makes industrial expansion locally all that much more attractive. In 2014, the Town of Hudson Bay invested in installing a new fuel facility at the airport. Fuel service is now operational. 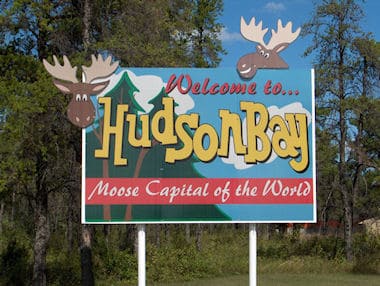 The airport, with a 5000 foot runway and a 2000 foot cross wind runway is able to accommodate almost any size of aircraft. In June, 1980 a Canadian Forces Hercules landed with troops to fight forest fires and the airport has also been host to several private jets.

In his remarks at the official opening, the Premier of our Province stated that the facility was more than just a critical link in our chain of water bomber bases. “Due to the easy access it provides for people to visit the Hudson Bay area… it will assist a great deal in developing the economic potential that exists here and I know that many more people will be able to enjoy the scenic beauty of this part of the Province.”

An estimated $2.6 million will be invested by the province to improve the runway, taxiways and aprons at the Hudson Bay Airport to provide better service for aircraft.

“It’s important to invest in this component of our transportation system,” Highways and Infrastructure Minister Jim Reiter said. “Airports have a role in sustaining our quality of life, such as supporting forest fire fighting and air ambulance services.”

Construction includes preparing and then repaving of the main 1,524-metre long by 30-metre wide runway, three taxiways and two aprons. A smaller secondary runway will also be decommissioned with part of it being used to extend a taxiway to allow access to the main runway. This decommissioning is occurring because the smaller runway is generally no longer used and is closed in the winter. The project is expected to begin as early as Thursday, August 4 and to be finished by mid September, depending on the weather.

Once completed, the airport’s runway will be better able to accommodate various aircraft, such as two types used by the province to fight forest fires: the Convair 580 land-based aircraft that carry fire suppressant retardant and the Turbo Aero Commanders (called Bird Dogs) used to direct the operation of air tankers. Presently only the following two provincial forest fire fighting aircraft use the Hudson Bay Airport: CL 215 water bombers and De Havilland Trackers that carry fire suppressant.

“Keeping Saskatchewan’s communities safe from wildfire is a priority,” Environment Minister Dustin Duncan said. “These infrastructure improvements will allow the provincial wildfire program to better utilize the Hudson Bay Tanker base as a staging area for the province’s air tanker fleet, including the larger and heavier Convair 580A.” The main runway will be closed for part of the project with accommodations made for emergency air ambulance flights as soon as work on the runway is completed. Limited aircraft operations will be allowed until all work is completed at the airport.

Pilots and air carriers are reminded to check NOTAMs (Notice to Airmen) regularly throughout the project as to the current status of the Hudson Bay Airport by checking Nav Canada’s website under NOTAMs at www.navcanada.ca.
The Hudson Bay Airport’s primary role is to support the air tanker forest fire fighting base at the facility. The airport is one of 17 owned and operated by the Ministry of Highways and Infrastructure.

The same contractor for this project, G.W. Construction Ltd., is also completing roughly 6 km of repaving on Highway 9 from about 2 km south of the south junction of Highway 9 and Highway 3 in Hudson Bay. This $2.5 million project began in July.